We crossed into Namibia at the Rietfontein border post, just as Kylie celebrated her 300,000klm birthday. It was all fairly straightforward except for a debate as to whether the Carnet, should or shouldn’t be stamped (technically South Africa, Namibia and Botswana all fall under the same stamp) but as we’d been stamped out of South Africa, we needed to be stamped back into Namibia. After an argument amongst themselves, we finally got our stamp and we were off into country number 4.

It’s amazing how different the countries are on either side of these imaginary lines and crossing into Namibia was no exception. Once through the border, there was nothing but desert, it suddenly all felt very remote! We drove onto the next town where we paid our road tax and then continued to our first camping spot in the Quiver tree forest. Quiver trees are actually a type of Aloe plant,  which the bushmen used to make arrows from, hence it’s name. They usually grow alone, so this ‘forest’ is the only place in the world where you find many growing together. The campground was also home to a menagerie of rescue animals, including 2 cheetahs which unfortunately can never be released back into the wild so have become very tame. It was amazing to see the cheetahs up close for the first time, absolutely beautiful – i hope we get to see wild ones later. 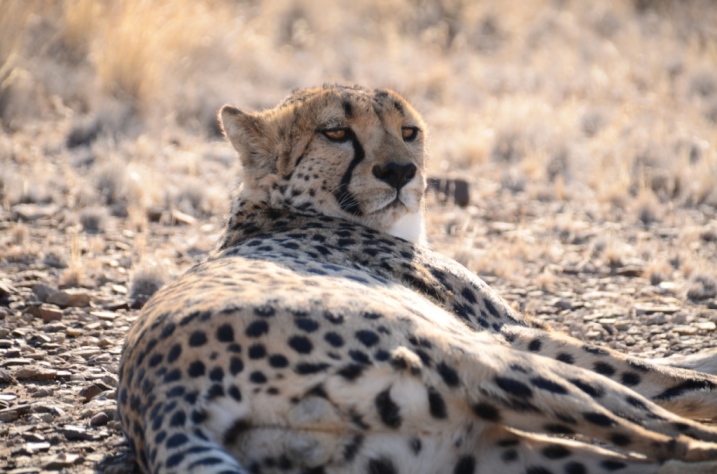 Cheetahs up close – sadly not wild ones!

From there, we headed south again towards the Fish River Canyon – the drive felt as remote as any we’d done in Australia – but the rocky wildness landscape was far more spectacular. The roads, although unsealed, are pretty good but the dust is so bad. After only a day, everything inside the car, including us, has a layer of fine dust covering it. Driving along with the window down, you have to keep clearing your sunglasses so you can see!

Arriving at Ai-Ais, was like finding paradise in the desert. Travelling out of season meant we pretty much had the whole resort to ourselves, so we quickly set up camp, dug out our swimmers and went to find the hot spring-fed pool. The sun was out, the water was warm, it was bliss to just soak in the water for a while. After a couple of weeks of camping in freezing conditions a hot spa was just what we needed and we spent a blissful afternoon lazing in the pool and getting some sun on the skin for the first time in ages.

Loving our spa experience so much we stayed another day, giving ourselves a chance to plan the rest of our route through Namibia, tidy up the car and do some laundry! It’s so nice to have clean sheets, clean sleeping bag liners, towels and pillow cases!! We also got plenty of catapult target practice, as a troop of baboons were constantly patrolling round the camp, looking for any opportunity to steal food. Man v’s Ape certainly makes for hours of entertainment – i’m not convinced as to which one was smarter! The springs are at the south end of the famous Fish River Canyon, so we drove to the other end to the view point, from which there are spectacular views across the canon – the biggest in Africa.

Not wanting to stay in the dustbowl camping area at Hobas, we drove onto Aus for the night, before reaching Luderitz the following day. They say Luderitz is more German than Germany – the old Schutztruppe certainly left their mark! Sandwiched between the dunes of the Namib desert and the Atlantic ocean, the only reason this town exists is the rich sources of diamonds that lie in the surrounding areas. We visited Kolmanskop, an old mining town that once boasted casinos, bowling alleys and mansions, until new diamond reserves were found elsewhere and the town was abandoned 50years ago, leaving the buildings to gradually disappear beneath the shifting desert sands. It’s a very eerie place, but fascinating to learn how lavishly they were able to live despite being in the middle of the desert. Amazing what money can buy! I kept an eye out for any ‘twinkling rocks’ but sadly they are all long gone. 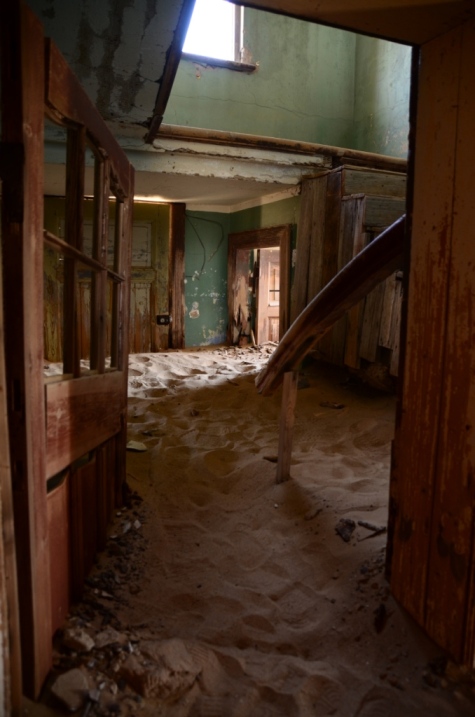 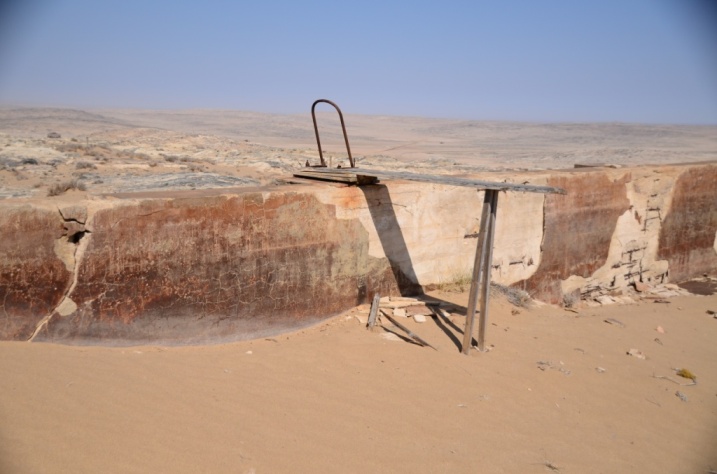 Unfortunately it seems the same can be said about our luck. On our way out to Cape Diaz, the engine suddenly cut out, leaving us completely stranded – again! Fortunately, we were blessed with 2 more angels, Swiss this time, who stopped to help us (Thankyou Mickel & Jocelyne Henry!!!). We managed to start the engine again, but with a lot of spluttering and juddering we decided it would be best to get towed back to town. So off we went, on the wrong end of the tow rope again! Fortunately it was only 30km back to our campsite and so once back Rich was able to give the engine a proper check. It looks as though the ERG valve that controls the air into the engine has worn out, so the air mix into the engine isn’t right causing it to splutter.

We’ll take her to a garage tomorrow, keeping our fingers crossed that it’s nothing too serious – but we’ll keep you posted 😦

And here we go again