As time frames and money begin to run out, Kenya for us was really going to be little more than a pitstop in Nairobi to get the visas we needed for heading north into Ethiopia and Sudan. Despite the less than ideal situation in Northern Africa, we have had confirmation from both locals and other travellers that it’s still ok to travel through, as long as certain areas are avoided. So with the decision made, we braced ourselves for a stressful few days, tackling the hell-bound traffic, in a notoriously dangerous city, to dance through the ridiculous hoops of the visa application process.

As we entered into Kenya, we began the steady climb up onto the western rift to the town of Eldoret, which at 2,500m provides the tough training ground for most of Kenya’s marathon champions. The cooler climate, the open fields and the roadside markets selling carrots, cabbages, onions, rhubarb(!), made it all suddenly seem very British, it was rather lovely. We found a great camp just outside town called Naiberi, where we could have happily stayed for a few days, but alas it was full steam ahead to Nairobi the next day.

Driving into the city, we were both quite surprised at how smart and modern everything looked. I think due its reputation we’d expected nothing more than some slum-ridden hole and as we drove into Karen to find the legendary campsite Jungle-Junction, the tree-lined streets could have been taken straight out of Richmond! Jungle-Junction is famous amongst overlanders – the central must-stop place to re-stock and repair before heading either north or south. As a famous cross-roads, it also means overlanders can swap valuable information about the ‘other side’ as well as finding new buddies to travel with on the lesser known roads. However, being low season and with problems in North Africa putting off many, we were disappointed to find that the usually busy campsite was pretty empty, just us and an Austrian couple, who are also heading north but at a slower pace. We spent the evening discussing strategies for the next few days and working out which embassy to tackle first.

And so the visa dance began. A trip to the British Embassy for a letter of introduction to the Sudanese embassy, because a passport is not verification enough? 3 hours later, and 50quid down, (yes, 50 whole British pounds for a letter confirming our names and passport number!) we left with our letter. Of course, this took us past 12pm, which meant that visa application hours at both the Sudanese and Ethiopian embassies had closed, so we headed back to camp. Day 2, we left at 8am and took 2hours to travel the 8km into town. We decided to take on the Ethiopian embassy first as the ambassador, according to many overlanders, is a face-tattooed witch who takes great pleasure in watching people lose all dignity by running them round in circles and then grovel at her feet for a visa. We had also been warned by other overlanders that this face-tattooed (yes, a crucifix is tattooed onto her forehead wish I had a photo!) is also a man-hater, so must only be approached by women. On this good advice, Richard was left to ponder his fate outside, while I tackled the witch alone. I must have danced for her well, as after a long interrogation about every single stamp in my passport and the third time of being sent for more copies of different paperwork she signed the application form and told us to come back after lunch with a receipt showing we’d made the payment at the bank round the corner. Lunch breaks at embassies are 2hours long, so we loitered around outside, hoping not to get car-jacked until their excessively long sandwich break was over. Returning triumphantly with our bank receipts, the clerk handed over our passports with the golden tickets to Ethiopia inside. Win!

Exhausted we headed back to JJ’s to compare notes with our Austrian friends, who’d similarly had success with their Sudanese visa. We swapped notes and prepared to tackle the next embassy the following day. We all headed to bed early, resting up for another day of visa hunting, but let’s just say that night we realised that the security at Jungle-Junction was far from adequate for a city like Nairobi and the next day we all packed up and moved onto a much nicer, secure camp called Wildebeest Eco Lodge which is run by a pair of Ozzies!

It took 4 full days of driving round Nairobi to get the visas for Ethiopia and Sudan sorted, we were exhausted! Once the visas were firmly embedded in our passports, it was back to Jungle Junction during the day to give the car a full service, changing filters and all fluids as well as a good clean out to ensure she is in tip top shape for the next adventure.  Once all the jobs were finished, we treated ourselves to a trip to the David Sheldrick Wildlife Trust, a charity which provides care for orphaned baby elephants until they are old enough to be re-introduced to the wild. It was amazing to see the keepers feeding and interacting with the babies, who now seem them as their ‘mothers’. The project is incredibly successful in reintroducing the elephants as well as continuing the fight against poachers, I just read the British Army are now going to provide more support which is fantastic news.

We are still in Nairobi, the lovely Wildebeest is a sanctuary I’m reluctant to leave! We are waiting for our replacement shocks, provided by RAW 4×4 in Australia (thank you for your continued support!) to arrive before we can head off north.  We have decided to take the most direct route along the Marsabit to Moyale road, the one part of the trip that we’ve not been looking forward to and with the rains about to arrive any day, we will be very happy to finally leave Kenya and get to Ethiopia! 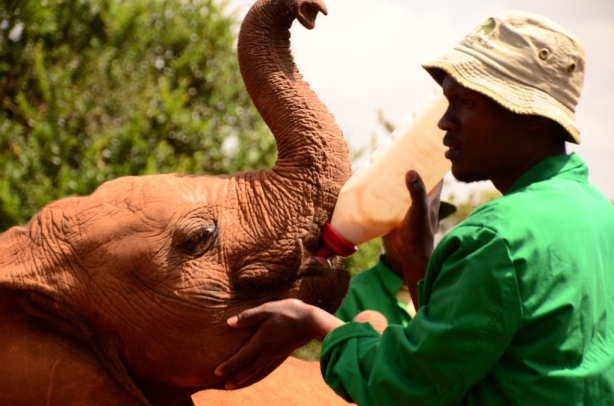 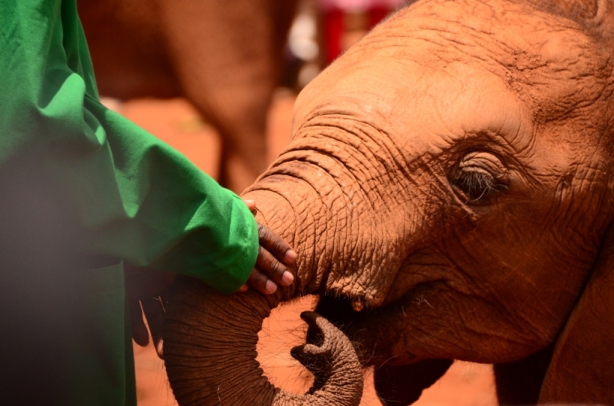