In just under 50days we’ve driven nearly 12,000km!! The journey so far has taken us across the breadth and length of Australia in what has been an incredible ‘warm up’ for our next leg across Africa. Having the opportunity to get used to life on the road has been invaluable before we hit the unknowns of Africa and despite this being the ‘easy’ part of our trip, we have learnt so much in such a short space of time. Learning how to live out of your car certainly takes some getting used to and never being more than a foot apart from each other can be testing on even the strongest relationships! However, we soon found that we naturally fell into a new routine, each of us having our own roles in the day to day set up of camp, making fires, cooking dinner, car maintenance, route planning etc. Our days were full!

As we headed into Perth, it felt strange to be breaking up the team so soon – we were really just getting into it – but our plans had always  been to hit Africa in June, so we could start the drive north through the winter (hopefully drier) months.  My parents arrived from the UK, the day we got into Perth, ready to make the most of our downtime while the car was at sea and spend two weeks touring the Margaret River with us – it was amazing to be back in the luxury of a house again, with a comfy bed, flushing toilet, hot showers…you really do appreciate the simple things in life when you’ve been camping for so long!

Most of the ‘improvements’ will be done once we get to Africa, but we installed black coreflute board into all the back windows so the car is more like a van now and will stop those prying eyes from seeing in. We also gave the car a proper clean out, washed everything and then did another cull of stuff we’ll be taking with us. Thankfully mum and bought a spare bag for us, so they could take anything back we didn’t need.

We chose CargoOnline to send the car with – their quote was much better than the others we’d seen and we knew other overlanders had used them to. They were really easy to deal with and were very patient with our questions and constant date changes! We dropped Kylie off in Fremantle, and once the rooftop tent & box were taken off we watched excitedly as she got put into her container for the long voyage. The guys at the depot thought we were pretty weird to be bouncing about taking photos – but for us it felt like waving off your firstborn on! And just like that it was done…..all seemed a little too easy???

A few days after the car sailed,  we got an email from the shipping agent to ask if the car was on a Carnet – we assumed all cars needed a Carnet, so thought it was a bit late to be asking these things! Turns out the Carnet needs to be stamped by customs before the car leaves the country?? We didn’t know it needed to be stamped out of Australia and as it hadn’t been requested we hadn’t given it another thought. Shit. Emails & phone calls were flung back and forth, but by this time it was late Friday night of the long weekend and nothing would be resolved for a few days.  At least we were in the Margaret River – a few wineries later and our minds were soon distracted! Our agent Rhys, on the other hand worked through the public holiday to ensure that we would be able to get a customs stamp retrospectively and it was a huge relief to be sent confirmation that we could take our Carnet to Fremantle customs house to be stamped once we were back in town. Phew. We now know that a Carnet has to be stamped in and out of every country – including Australia! 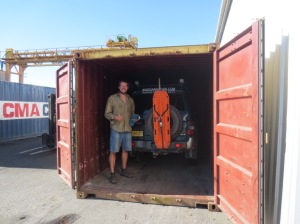 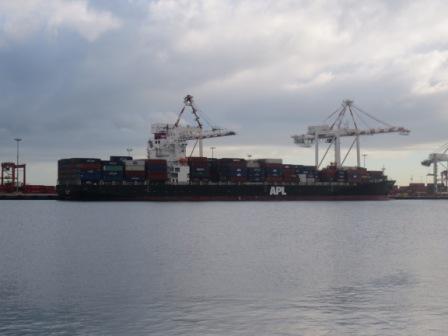 Tags: cargoonline, carnet, fremantle, shipping
From: Preparation, Shipping
← Quobba (the reunion) and Shark Bay
A holiday from holiday →
No comments yet