First of all, it seems our Spot Tracker doesn’t work in South Africa – so sorry if you’ve been trying to locate us! We will update our route for you soon, but hopefully the coverage will improve as we reach Namibia so you can keep an eye on where we are.

After an amazing few days in the mountains, it was time to head south again, so we trundled across the Free State, staying briefly in Aliwal North & Craddock on the way down to the Eastern Cape. We tend to plan a rough route the night before and work things out as we go, but the night before the final Lions the route had to be meticulously planned to ensure we went via a pub that was showing the game. So with a pub sourced and the route timed to arrive just before Kick off, we set off for Addo, all going well until Rich realised the match was actually kicking off 2hours earlier than planned and we needed a plan B. ASAP. After initial panic, cursing and raised voices Tracks4Africa blessed us with directions to a pub only a few kms away! We called ahead and they said they would open early for us and put the game on! It was a sign. We skidded into Middleton Manor with only minutes to spare and the young barman opened up for us and the wild crowd of 2 cheered as the Lions won their first series victory in 16years! We were in such a hurry to watch the game, we’d paid little attention to where we actually were – from the outside a beautiful country manor – landscaped gardens – an assortment of free-range animals – lots of young adults? As it turned out, Middleton Manor is in fact a rehab centre – where patients spend the second half of their year long programme – not that you would ever know unless you asked. Talking to the guys there was an eye-opening experience. All had chosen to go on the programme, desperate to re-start their lives before it was too late. Our barman, only 21, was recovering from a 7 year heroin addiction – so young to have seen the things he’s seen but the way in which he spoke was wise beyond his years and now with a new sense of direction he was only weeks away from being reunited with his family including his 18month old son determined to prove he was a changed man and get his life back on track. The treatment they choose is brutal, the first half is spent somewhere he could barely talk about except to say that he picked up a bible for the first time in his life and reading that was the only thing that kept him alive, but the reward if you survive that place is Middleton Manor where softer treatment continues and they begin to prepare for life back in the real/clean world including working at the manor guesthouse and pub. We both felt very touched by their stories, and inspired by their determination to start over again – we wish them all the best of luck with their recoveries.

It’s amazing who you meet when travelling, and actually having the opportunity to stop and talk to people, share stories, learn new cultures is what makes travelling so special. We have already met so many great people and everywhere we go, when people realise we’re in an Aussie car are keen to know about our journey and offer support in anyway they can from accommodation, food, booze or even just a toot and a wave as they go past. The Afrikaaners are also keen to know what we think of their country. They find it sad, the way in which South Africa is portrayed to the outside world and feel that many people are put off coming here by what they read in the news, so are thrilled to see tourists. We too had reservations, and yes, there’s no denying this country has many underlying problems, but as a visitor we couldn’t have been made more welcome, the standards of food and service are higher than those in Australia (and a fraction of the price!!)the scenery is just spectacular and the wildlife is just unreal.

After the Lions, we headed to Addo Elephant park for our next animal instalment. We spent a couple of days driving through the park  and got our first real close up encounters with elephants – who fortunately seemed pretty chilled out with the cars going by, but even so we felt relieved to be facing them in Kylie this time, not a fiesta! We had a great day of animal viewing, but still no sighting of the big cats – we could hear them, just couldn’t see them! For anyone visiting, don’t bother about camping in the park itself as it’s always really busy and for a much better price you can camp at the Aardvark Guesthouse which has fantastic facilities and is only 10km from the gate.

After Addo, the weather warmed up and the next few days were spent ambling down the Garden Route discovering the delights it had to offer. StormsRiver has to be one of the most spectacular coastlines i’ve ever seen, with the rugged cliffs dropping dramatically into the sea. The manicured camping spots sit right by the water’s edge and as our timings have coincided with the annual whale migration we were treated to an afternoon of  twenty or so whales breaching time and time again. It was a show like no other!! The next day we took our fading fitness for a hike to the suspension bridge and up onto the cliff tops – a walk that should have been easier than it was – truckers syndrome seems to have well and truly arrived!  The rest of the Garden Route is a beautiful drive, the road winds through several more amazing little towns and beaches – Kynsna, The Wildnerness, Mossel Bay – it’s barely African – but stunning all the same!

We found our next little piece of paradise at De Hoop nature reserve – tucked away between Cape Town and the start of the Garden Route, many people miss it – but it’s an absolute gem. The camping area is right by a salt lagoon (vlei) which is a twitchers’ paradise with over 3,000 species of birds and around 30,000 birds living on it currently. Despite lacking in bird-identification skills, it was still fun to spot ‘the big white bird’, the ‘funny looking black thing’ and the very rare ‘long- legged cooty-whatdyacallit.’ I did correctly spot flamingos though and plenty of ostriches! The other side of the Vlei, turns into huge towering white sand dunes that mark the edge of the marine reserve – the water was so clear that from the dunes you could sit and watch the whales and dolphins swimming nearby as well as the occasional shark! It is just stunning, and as it’s so remote, the stars at night are amazing so we joined a star tour to try and learn some of the constellations.

Today was a big milestone in our trip – Cape Agulhas – the most southern point in Africa which means the only way is up from here! In a straightline, it’s only 8,000km to the top, but we’re probably going to triple that! We’ve had a very easy introduction into Africa so far and we can’t help but wonder what lays ahead of us as we begin our journey north?? But first, we are really looking forward to getting to Cape Town. 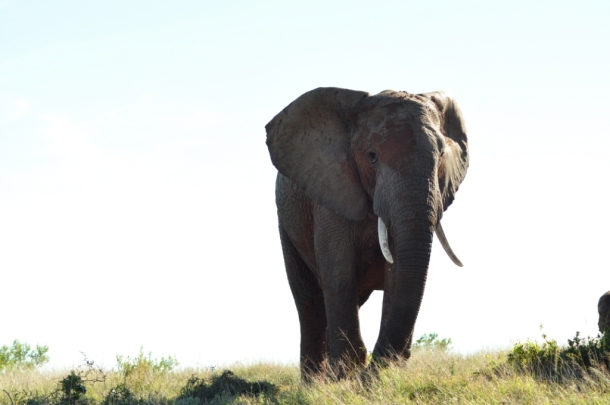 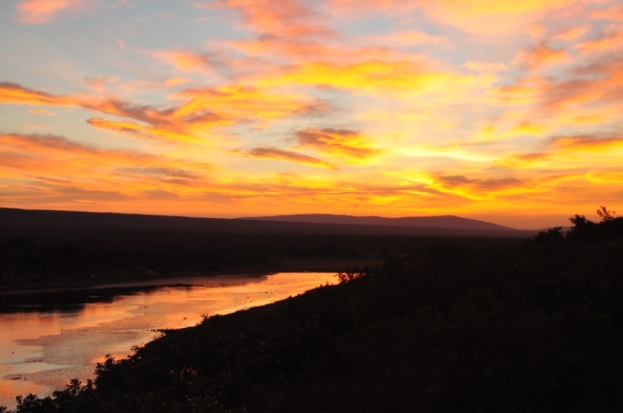