Wild encounters in Moremi and Chobe 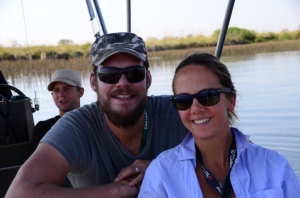 We made it! Recovering in Kasane after the most intense, exhilarating, exciting, exhausting 5 days of the trip so far. Spectacular scenery and more wildlife than i ever imagined, combined with the hardest 4WDing we’ve ever experienced and very little sleep – it will take a few days to fully process just what an incredible experiences we’ve had!

Driving out of Maun, the road turned to sand almost immediately –it’s straight into it! Our first camp was at Third Bridge, in Moremi, just on the edge of the Okavango delta. As we drove on throughout the day, the sand became deeper and deeper which is hardwork on the driver, but Kylie ploughed through. We spent the day exploring the ‘Moremi tongue’, the sandy tracks around the inner delta before heading to Third Bridge.

As we arrived at camp, we had to wait while a herd of elephants tucked into the trees right around our allocated spot. We waited for them to move on a little further, but as others were already setting up camp, we figured we’d be safe to also start getting the tent up. As we began to set up, there were still around 10 elephants close by, so being out of the car for the first time and being so close to them certainly kept the adrenalin pumping but gradually we began to relax as we realised there were more interested in the trees than us! At one point a young elephant decided to come and investigate us a little closer which had us running for cover, but once he’d sniffed us out he soon returned back to the rest of his family.

The first night in the wilds, was a nerve-wracking experience to say the least and as darkness fell we were both on tenterhooks as the sounds around us seemed to grow louder – we were quick to get to bed! Sitting up in the tent, the sounds of Africa took over and the noise was just immense. Elephants crashing around, baboons yelling and screaming, Hyenas calling. hippos grunting and lions roaring in the distance – it was animal mayhem and there was little chance of getting much sleep! We lay there listening to the commotion outside the tent, our hearts beating faster whenever we heard something near the tent. At one point Richard looked out when we heard branches snapping right by us to see that we had a whole family of giraffes right round us! Despite being up in our roof tent our windows were still well below their shoulders!

We were up at daybreak the next morning and headed out on a boat trip across the delta with 4 other German friends we’d met in the camp the night before. (One of which had also just completed an overland drive from Germany to Cape Town, so we got lots of great tips!) We sped off through the long reed beds on the edge of the delta heading towards some of the inner lagoons where we saw crocodiles and a hundred different types of birds from beautiful little kingfishers to great big African Fish Eagles. It was amazing to be out on the water, or in a pompous British accent ‘ We were on the Oko DL, darling’!

Not going this way!

The afternoon was spent exploring further into the pans, which are an absolute maze of tracks and easy to get lost in. Despite the fact we’re here in the dry season, the Delta is actually in full flood, so as we ventured off down different tracks we found a number of them impassable as the water was so high. Being out by ourselves we were keen to avoiding getting bogged, so anything that was too deep we stayed well clear of. Taking a break that afternoon we discovered another coolant leak, this time the bottom hose looked as though it had begun to perish, so while i was on lion lookout duty, Rich was back under the bonnet fixing up the hose. Becoming accustomed to bush fixes it didn’t take too long to patch up and once sorted we sat back in the car to relax and take in the sight of the delta. Taking in the beautiful surroundings and the stillness of the day we hadn’t noticed the huge African Elephant bull approaching the car, despite being over 5 tonnes in weight, he hadn’t made a sound and the first time we realised he was there, was as his trunk began to come through the window! We calmly panicked and managed to quickly put the windows up, the trunk was quickly retracted. It’s amazing to see how gentle these giants can be and satisfied we had no citrus fruits in our car, he headed off into the bush.

Another night of animal pandemonium and with bleary eyes we were up at dawn again. The night also seemed to have taken its toll on one of the younger elephants who we found fast asleep near our tent! Even after packing up, he didn’t seem in any rush to move off his nice comfy patch of grass, so we left him to his Elephant dreams and headed on towards Savuti.

The drive up to Savuti is notoriously tough, just leaving the camp you drive over the ‘Third log bridge’ which is actually submerged, the last part being so deep the water actually comes over the bonnet! The rest of the tracks are a mix of corrugations, deep sand and gullies which if you drive over at any speed soon turns the car into a bucking bronco. It took 9hours to drive 160kms. Along the way we met a Namibian couple, who stopped us for a beer after a particularly gruelling section. Having been to the park several times, they were incredibly knowledgeable about the area and invited us to their camp that evening.  Savuti used to be a huge sunken lake which dried up thousands of years ago and once the remaining waterways dried up, the surrounding land became a barren desert leaving the lions and hyenas to engage in huge battles over the little that was left and cement blockades had to be built round the ablutions and water taps to stop the elephants from destroying everything to get at the water. Then around 5years ago a seismic shift caused the Savuti channel to flow again, the first time in decades, turning the desert back into green marshland once more.

We spent an amazing evening with Richard and Leez, although the walk back to the tent through the darkness was absolutely terrifying. We walked back to back, scanning for ‘eyes’ with our torches in one hand, the other armed with pepper spray. A comical sight i’m sure, but we both breathed a huge sigh of relief once we were safely back in our tent.

The next day we’d asked if we could go out with them, as they had experience tracking animals. We sound found lion tracks and were off across the marshes. In the distance we the entire horizon was covered with buffalo – the lions favourite food – we just needed to find a way to get to them. We began to reach the water channels, travelling in convoy we felt braver to tackle the water crossings than if by ourselves. But gradually the water began to get deeper and deeper and we were soon wondering what we’d got ourselves into. We’d gone too far to be able to turn back by ourselves, but we were nervous about the car’s ability to go deeper – but that day Kylie redeemed herself. She ploughed through mud, sand and water, despite the water coming well over the bonnet and our feet were starting to get wet. The final crossing lead us back through the Savuti channel itself. Our friends went first, and as we watched their Toyato Landcruiser disappear up to the windows, we knew that Kylie would be practically submerged being such a smaller car – but the only way was forwards. I was terrified. As we drove into the channel the water was so deep it came up over the windscreen and i thought we were done for, but the car kept going and we were soon out the otherside. Shocked and shakey but so relieved to be back on dry land we kissed Kylie the wonder car! After that we decided to call it a day, we still had a long drive ahead to Chobe so we had to leave the Buffalo chase at that point. But what an experience, tracking Buffalo across the Savuti marshes in our little Kylie.

Tea break on the Savuti marshes 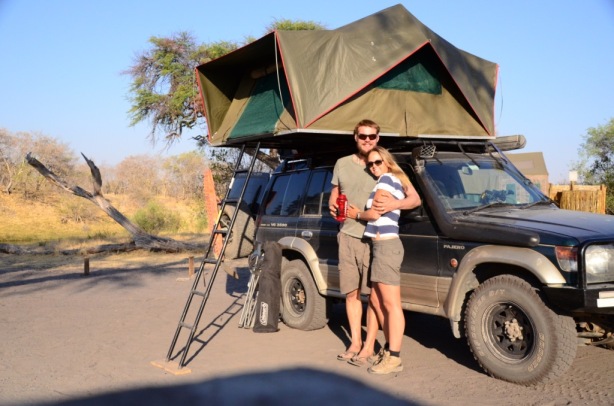 The intensity of the last few days had begun to take it’s toll and our exhaustion had hit new levels, we were feeling pretty broken and keen to get to our next camp for a rest. But as we turned into the Chobe park and drove down the escarpment, before us the river and the flood plains opened up before us in one of the most beautiful sights we’ve ever seen – had we found Eden? The grassy green plains were covered in thousands of animals, zebras, giraffes, antelope and elephants. We thought we’d been lucky to see around 50elephants at Etosha, but we couldn’t quite comprehend that before us we could see over 500! There were elephants for as far as the eye could see. It was simply unbelievable. The numbers of elephants here are quite controversial as they are so destructive, that they have decimated what used to be a wooded waterfront – all that is left of the forest are patches of stumpy ground. However, the amount of elephant dung keeps the soil fertile, so around the river it is lush green grass – is it a bad thing for a landscape to evolve from woodland to grassland? Our camp that night was at Ihaha, right on the water’s edge. Tired beyond belief we went to bed early and shortly afterwards we could hear the approaching footsteps of elephants. Too tired to be scared, we watched as their looming grey shapes passed by in front of our tent – one by one they marched past we think there must have been over 40. A tip we’d learned from our Namibian friends was that elephants don’t like to cross from the darkness into light, so with so many around we were glad we’d left a rooflight on, to create a light boundary round the car.

For the first time that week we had a lie in until 6.30 and sods law, that would be the day that lions walked past our camp only moments earlier. The rangers came to see us asking if we’d seen the lions –  There had been a pride of 6 which had just passed by our tent about 20minutes before! We couldn’t believe that we’d missed our first opportunity to see lions close-up, but in our sleepy haze it was probably a good thing we weren’t up!

Botswana has been a mind-blowing experience. We have loved, loved, loved everything about it and the vibe and the people are just so relaxed. We have spent the last few days recovering at the Chobe Safari lodge, which has a beautiful deck that looks out across the Chobe – perfect for sundowners whilst watching the elephants amble along on the far bank. An absolute must if you are visiting Kasane.

From here, we will now head onto Vic Falls in Zimbabwe! 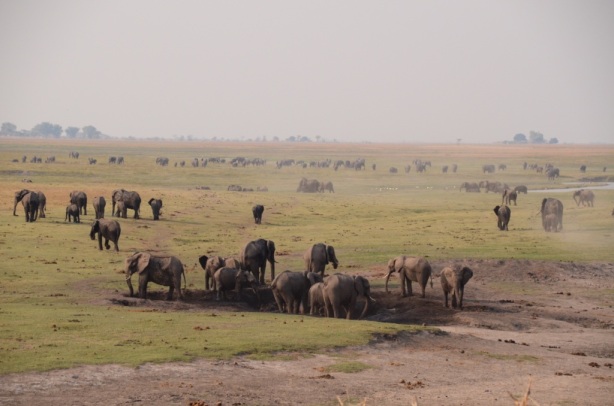 Elephants as far as the eye can see – Chobe 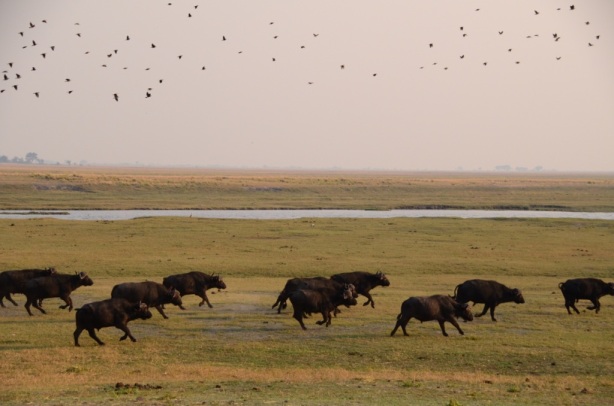 This baby elephant was only 5days old!