And so we left Sydney 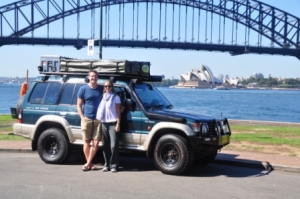 Thursday 1th April, 2013, we finally drove out of Sydney. After months of planning, we had both dreamt of this moment for a long time, but despite romantic visions of fanfares and high-fives, it wasn’t the triumphant occasion we’d imagined it to be. Having only finished full time work on the Friday prior, we’d left no time for final preparation/packing or unforeseen setbacks…and there were a few! We were both stressed and exhausted.

A trip to see Daniel at the Expedition Centre to help us fit a Pelican Box to the roof, also gave him a chance to fully check over our set up. Thank god he asked us about our water filter system, as what we thought would work –in fact did not and so needed Richard to completely rebuild it. Although frustrating at this point in time, it would have been a complete nightmare had we discovered this en-route! Ideally we wanted to be able to filter everything going into the water tank, but our amazing Doulton ceramic filter meant that not only were the bugs not getting through, but the water wasn’t going to go through it either, unless we got a much bigger pump. It took 3 days of trial and error and god knows how many trips to Mitre 10, but with some expert advice on hand, the mechanical engineer nailed the art of plumbing! (Our system now pumps straight into the tank and we filter out what we use).

With water up and running, there was only the remaining packing left to do – again easier said than done. Somehow we managed to find a place for most things, but we are packed in tightly! Am sure we will need to shed things as we go, as pretty sure we’re over the load capacity of the car. The last thing on our list before we left was to organise Tourist Visas for Aus. Now that we had both finished working, our 457 had also ended so we needed a holiday visa to cover us for the next few months. Again, something that we thought would be quick and simple, but proved to be a total nightmare. We tried to complete the application online, but were informed we had to go to the immigration office. We got up early on Thursday morning, headed to the immigration office in Sydney, only to be told that we had to have an appointment – there wasn’t one for 3 days!! Arrrgh Our only option would be to detour to Canberra – we’d read about the visa dramas you’ll face in Africa, but were not prepared for this! So following an exhausting and stressful few days prior to leaving, we drove up to McMahons point for the first ‘Landmark picture’ of the trip – the Harbour Bridge & the Opera House. It was a strange moment, having expected to either feel elated about starting the trip and emotional about leaving behind a place & people that we love so much – but by this point there was little left to give and we felt neither happy or sad. We just wanted to start the journey we’d been thinking about for so long.

LIFE LESSON #1 – No matter how much preparation and planning you do – there’s always an extra 10% you need to allow for! 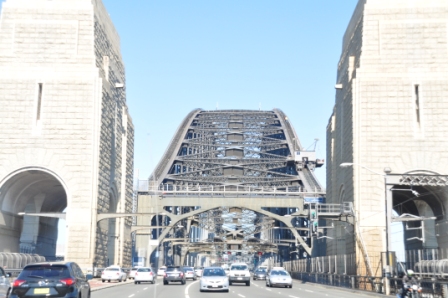